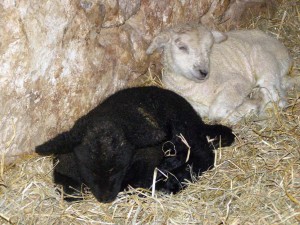 Babies!! And Queens! We have babies and queens!!

No, not human babies. These babies didn’t cause me a one little flicker of pain. Well, no pain but I did lose some sleep and added a few gray hairs because of them. But they are cute and cuddly and little balls of squishyness so I forgive them. But the Bad Queen, well, she’s not someone I can forgive. The Good Queen has happy, faithful subjects. The Bad Queen is about to be overthrown, by both her subjects and the controller of her universe (aka: me.).

But before that tale of trouble, the babies!!! The cuties!!! The bouncing balls of energy!!!

The first babies born on our farm arrived bright and early on Easter morning! Our ewe, Molly, had a beautiful set of twins: a pure black male and a pure white female. They each got “Eastery” names: Eggbert and Esther. The next morning Alice gave birth to a single pure white male, which the kids dubbed Francis. (We tried to breed a third ewe but it doesn’t seem like she “took” so I think our lambing days are done for the year.) We are keeping the female but the two males will hang around until fall when they will be introduced to my freezer.

And we’ve got goat babies! Our three goats each gave birth to twins, which tripled our herd We have two males (Hermes and Tyler) and four female kids (Hera, April, Holly and Polly). One set of twins (Holly and Polly) are identical which is pretty cool. And they all are so adorable. All the mamas did a fantastic job bringing the babies into the world. The oldest twins are almost 3 weeks while the youngest set is only one week. We only need the mamas for milking so the kids will be going to the farm where we originally bought our goats once they are weaned. I know when the day arrives we’ll be sad but at least we can go visit if we ever want to. We’re hoping to start milking sometime within the next week or so. 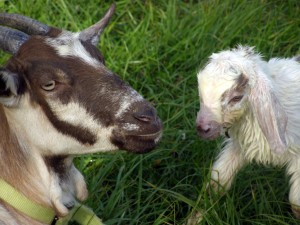 The identical twin girls, Holly and Polly. Don’t ask me which is which! Playing on the slide

Almost two weeks ago, we picked up 85 one-day-old Freedom Ranger meat chickens. At our house, meat chickens are called “The Chicken Nuggets”. Yep, we even call them that to their beaks. They are currently in their brooder in our garage. We’re hoping to move them outside into the chicken run tomorrow. Josh built a little hover box to hang in their outdoor pen to provide them with heat if they get too cold. I’m debating bringing them back inside at night until we hit the warmer overnight temperatures forecast for later this week but just the thought of corralling 85 Chicken Nuggets running wild makes me tired. (Sorry, no chickie pictures. Last year they were cute so I took a ton of photos. This year, they are food-to-be. My how times change…)

A photo from last year’s Chicken Nuggets. Imagine the kid taller, otherwise they look the same.

And now, for the news of the Queens!

Queen bees, that is.

The bees enjoyed the wonderfully mild winter and are growing like crazy! In fact, one hive is getting ready to swarm already. (When they get too crowded, they start growing a queen egg. Right before the queen egg hatches, the old queen takes half the hive and heads for the hills. Actually, they usually head for the nearest tree for a day or two and they vanish to parts unknown.) This is the hive the Good Queen. Her house – er – hive is in order, her subjects adore her and all is well. So tomorrow (hopefully) we’re going to split that big hive into two littler hives. She will remain in one hive and her daughter will rule the other. A frame with Italian Honey Bees

Our other hive, which has always been weaker, is doing okay as well but the queen (hereafter to be known as the Bad Queen) isn’t doing the best. The Bad Queen doesn’t lay her eggs in a uniform fashion (not like the photo above) and she doesn’t keep the other bees acting in the appropriate manner. We think the other bees have noticed because we see a queen eggs being grown in this hive as well. (When the queen starts to fail or isn’t up to par, the bees decide to make a new replacement queen. The reigning queen has no say in the matter and if she tries to interfere, they will actually kill her. They take their queens very seriously.) So, since any new baby queen would be the daughter of the “so-so” queen, we decided to buy a new queen in hopes that she will be better than the daughter. Tomorrow we will find the Bad Queen, squish her and put the new, hopefully better, queen into the hive. Or so the plan goes. Have you ever tried to find one specific bee in a hive full of 30,000ish other squirming, moving, almost identical bees? Um, not so easy. Keep your fingers crossed that it goes well and the reign of the Bad Queen comes to an end.

We aren’t all just babies and queens around the homestead but those are the things on my mind right now. There are tons of other things going on – vegetables started indoors, fences being put up, wood being cut and split, kids almost finished homeschooling for the year (woohoo!), and about 1,000 other things. Some days I feel like I’m in control and doing just fine. Other days I wonder how in the world all this stuff will get done. But somehow all the important things will get done and the unimportant ones don’t matter that much anyway. Wood house

Firewood - cut, split and stacked into this beautiful yard ornament

All in all, it has been a great spring. Hopefully things are going great in your neck of the woods too.

Get the latest news right in your inbox. We never spam!

Biking Through Iowa’s Rural Areas
A Peek Into Fall