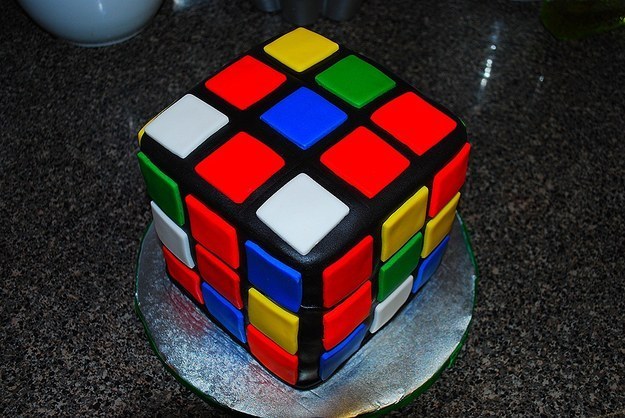 2. In 1974, a young professor of architecture in Budapest created an apparently impossible object

3.The first Magic Cube (as it was originally known) was sold in a Budapest toy shop in 1975.

Each of these includes a concealed inward extension that interlocks with the other cubes, while permitting them to move to different locations.

8. Rubik’s solid cube twisted and turned – and yet did not break or fall apart. Some people are still trying to work it out.

10. Over 350 million Rubik’s Cubes have been sold worldwide – making it the bestselling toy of all time

13. If you turned Rubik’s Cube once every second it would take you 1400 TRILLION YEARS to finish to go through all the configurations.

14. If you had started this project during the Big Bang, you still wouldn’t be done yet

15. Yet, amazingly, the best speed cubers* can solve the cube in under six seconds.

Speed cubers = people who take part in speed cubing – a sport where competitors try and solve the cube as quickly as possible.

16. The current world record holder is Mats Valk from the Netherlands. Who completed the puzzle in 5.55 seconds.

18. This beat the previous record of 5.66 seconds held by Australia’s Feliks Zemdegs.

19. Some speed-cubers go for style points over raw speed.

20. This guy took a whole 25 seconds. But he was doing one-handed push-ups AT THE SAME TIME!

21. Another dude took 28.80 seconds to solve the puzzle BLINDFOLDED!

22. A three-year-old in China solved the puzzle in under two minutes.

23. And then there’s this guy, clocking in at ten minutes, using his nipple. Oh, internet.

5. Earlier this year CubeStormer 3 solved a Rubik’s Cube in 4 .253 seconds

26. Hell, even Mantis Shrimp can do the puzzle.

28. The first annual International Rubik’s Championships were held in 1982.

29. The winner was Minh Thai (USA) with a relatively slow (compared to modern times) solve of 22.95 seconds.

30. Every legal permutation of the Rubik’s Cube can be solved in 20 moves or less

31. The world’s largest Rubik’s Cube is located in Knoxville, Tennessee. It is three metres tall and weighs over 500kg.

32. The smallest cube is 10mm wide and was made by Russian Evgeniy Grigoriev.

33. It is fully functional and can be used like a normal cube.

34. In 2011 Evgeniy created an even smaller cube so tiny it could only be 3D printed.

35. The most expensive cube ever produced is the Masterpiece Cube, created by Diamond Cutters International in 1995.

36.This actual size, fully-functional cube features 22.5 carats of amethyst, 34 carats of rubies and 34 carats of emeralds, all set in 18-carat gold, and has been valued at $1.5m

37. Rubik Cube obsessives are known as “ Cubaholics ”. There’s even been a documentary

38. In 1981, British pop group, The Barron Knights released a song called Mr. Rubik which appeared on their album Twisting The Knights Away . The song is about a person who is going crazy after playing a Rubik’s Cube.

39.In 2011 Cubeworks, a Toronto collective, recreated more than

40. There’s even been a Mario version