Can urban homesteading feed the world ? 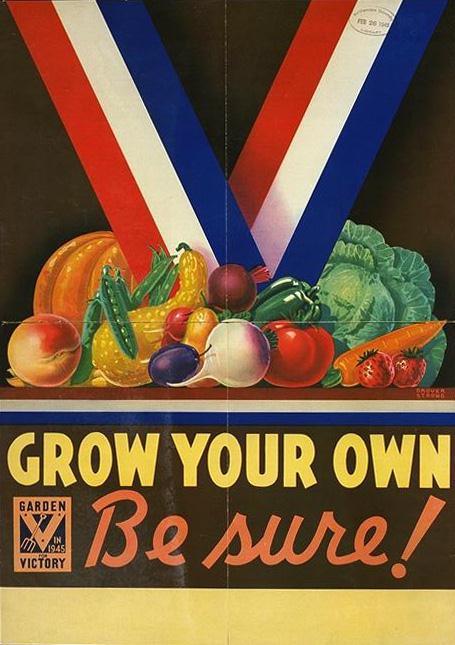 Recently I read this article at Grist and while I liked some parts, I disagreed with much. It argued that urban farms and homesteading were unlikely to do much in the quest to feed an ever growing, ever urbanizing, ever globalizing population, but it might provide some kind of educational benefit or something. Their arguments make sense, if you go into it assuming that everything else they talk about is the right way for things to be. Personally, all I could take away from it is that they were focusing on the wrong problems. This is why intersectionality in environmentalism is so important.

The article starts out by stating that in the 40’s victory gardens were able to produce 40% of the nation’s fruits and vegetables, so right there is evidence that clearly it is physically possible to produce a large quantity of our food in our own back yards, in cities and suburbs. But the article fairly points out that what is physically possible is not necessarily realistically practical in this day and age. Where they lose me is where they fail to address the underlying reasons why it is no longer cost, time, or space efficient to grow our own food in urban areas, and what could be don’t to remedy those problems.

For example, the article makes the claim that time is as costly as land in cities, and “For someone with two or three part-time jobs, it makes economic sense to put in time at work and collect a paycheck, rather than cultivate a garden in hopes of saving a little money at the store.” Correct me if I’m wrong, but isn’t this a fair pay issue, and not an issue with gardening being anymore time exhaustive than it was in the 40’s? The problem they are siting here is problems with fair pay, lack of available work, and ultimately, lack of access to equal education for all (which allows employers to justify shitty pay and stability for workers). The problem is not that urban gardening suddenly no longer works.

The article also mentions the problem with urban farms not being profitable because of the higher cost of the produce, again, a fair pay / access to work issue coupled with problems with commodity crop subsidies, and issues with efficient use of space, which is just a cop out so we don’t pay attention to the real problem of shitty city planning.

Let’s take a step back for a minute and ask ourselves why it was able to work in the 40’s, but not now.

Well, first of all, most families had at least one adult who was able to spend the majority of time at home, caring for domestic tasks without the need for generating income. Other members of the family worked, and at least one of them was likely given a family salary. Others were probably children with a paper route or something of that nature.

Now, I understand that what this meant in practice was that a woman’s place was in the home and the man went out and worked as the bread winner, and I’m not advocating for a return to that. Not exactly. What I am saying was that there was something to the family wage. Collectively, a family was able to dedicate more time to domestic tasks and bring home the same amount of money, and that could be replicated today in a less sexist way, by offering people higher wages (and equal pay), employing more people, and working each individual fewer hours. This would allow for all partners in a relationship to pursue a career, make a decent income, and have more time to spend on domestic pursuits (or any other free time pursuit they wanted, really). Or families would have the flexibility to let one person stay home entirely if that’s what was right for that family. This would make for happier, healthier people in addition to making victory gardens economically viable and time feasible. Throw in equitable access to health care and education, and you just improved quality of life for the whole country 100 fold, while increasing the odds that we can continue to solve problems like this in the future. It’s true that in the 40’s populations were less urban, and the changes we’ve seen to urban populations makes victory gardens harder. But the problem there is that we’re still designing cities like we did in the 40’s (or, probably more 50’s), and that’s about the least efficient way we could design things. Jacque Fresco and others at the Venus Project are one example of people coming up with amazing designs that could support an ever urbanizing population sustainably and efficiently, including means of growing most (if not all) food within cities. It is most definitely possible, it’s just a matter of allocating resources and priorities towards those projects, and that will never happen if we keep telling people that local food isn’t a solution instead of telling them that poor city planning is the problem.

I think this article also unfairly focuses on urban farm problems and applies it to an urban homestead, which are not the same thing. A farm’s goal is to turn a profit. A homestead’s goal is to feed a family. There is a place for both of those things, of course, but under our current economic and structural conditions, I think that urban homesteading is far more viable (especially if we’re trying to replicate what was done in the 40’s, which didn’t involve urban farms at all). It’s smaller scale, requires less space, and the families dependent on it don’t count on it as their only or even primary source of income. Still, the article completely over looks the fact that there are ways to grow food in cities that are neither farms nor homesteads. Permaculture.

I know Denver plants hundreds of trees around the city regularly, we have thousands of them, in parks and along sidewalks and in medians. How easy would it be to plant fruit trees instead of cottonwoods? How about edible landscaping? How about raspberry bushes and zucchini plants and other food crops that require little maintenance. We’re already maintaining so many non edible landscaping displays, why not replace them with plants that can feed the hungry. As tax payers, we’re already paying to maintain trees and landscaping. It would be nice if it could feed the homeless and hungry at the same time.

The article makes an attempt at measuring the value of the non monetary benefits of urban farms, but I find it’s attempt to be slightly condescending. It fails to recognize that things like improving communities, enhancing education, and improving health actually provide monetary benefits, in addition to the warm fuzziness this article extols. All of these things increase property value and earning potential, while reducing crime and fraud, waste, and abuse in local government because citizens tend to be more involved. This in turn addresses at least a small bit of the economic issues that they claim keeps people from growing food in the city in the first place. Further, maybe it’s about time we started valuing ourselves and our productivity beyond the monetary standard.

Don’t get me wrong, I think this article brings up a lot of important points, but I think it’s application of those points is all wrong, and ultimately limiting. If we want to address issues of food security and global warming, we need to be able to tackle issues of poverty, education, community ties, and urban planning. Telling people that gardens don’t work is the wrong thing to do.

Get the latest news right in your inbox. We never spam!
Meet the Sheep
Life In The Prairie States Of America